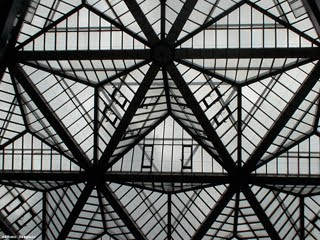 ““In the eyes of the artist, light converts matter (water lilies, weeping willows and water) into color fragments, which – translated into oil painting – can be fixed on canvas by a Monet.
In Frankfurt’s station hall the same light brings about a sparkle that lights up humans and objects, giving them unfamiliar shapes. As if they had a new inner life, phenomena actually dissolve into light structures that can only just be held together in cohesive images of sight and recall:
“Finally the entire glass hall had become a huge sparkling, and from the people light penetrated outward as from colored paper wrappings beneath which candles are burning. Intoxicated by the light, he had gleamed the most himself, with a small patch of wool in his hands hanging forgotten between needles.””